See you...., originally uploaded by lille-ursus.

In my family we never say "goodbye" when we part.

Ever since my mother had a very serious stroke 9 years ago, we began to skip "goodbye", and started to say "see you"...

I really like the thought of "see you". It's such a positive statement, which sends the message that we will meet again very soon.

And there was a great deal of hope in those 2 words 9 years back.

So, I leave you with a very happy "see you" and the wish of a loving, beautiful, exciting 2010. I would be so thrilled to "see" you again...

The very last mosaic of the year.... ...my sister and I are not going to spend New Years eve with our big daughters. Anne-Sophie is going to be here - in London - with her sweet boyfriend Tim. A gorgeous Christmas present he gave her... 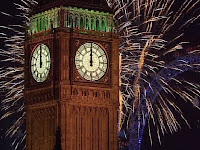 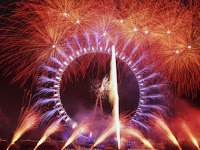 And my niece Ida is already here - in the Faroe Islands - with her boyfriend Runi....

It's so wonderful for both of the girls. My sister and I totally agree on that. But...

...it's going to be strange and maybe even a bit sad to celebrate the evening without them. But I assure you that the cell phones will be red hot, when the new year has begun at 12 o'clock.
written by Ulla V. kl. 13:54 5 comments:

For years and years - at least it fells like that! - I have heard Christian speak about a very special sweater. A brown one, which seems to be knitted and felted. During spring it's on the telly once a week in a program, which has been sent for lots of years. It's a garden program - Søren Ryge præsenterer - hosted by a man called Søren Ryge, for those of you that don't watch Danish TV. The sweater in question looks like this and Christian adores it: 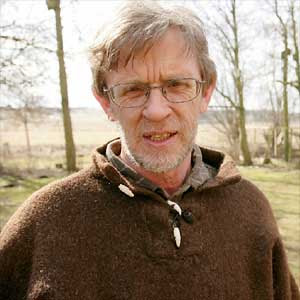 Nevertheless, a new sweater has been very relevant in Christian's mind lately, and the brown Søren Ryge one has been temporarely forgotten. For many months even.

This beautiful (and I bet extremely funny to knit one) has thrilled him: 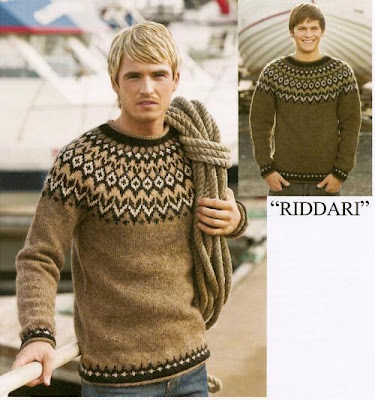 Well, that's what I thought!!!

Because when Christian and I sat down to pick out yarn and pattern for the new sweater I wanted to make for him, as a part of his Christmas gift, something unexpected happened.

The gorgoeus Lopi pattern was no longer on his mind. Need I say which one he all of a sudden remembered??? ....all I have left to do before starting all the preparations, is to wish you all a very merry Christmas.

The old angel is from my grandparents' home, and I have loved it all my life. Now, it reminds me of lots of love and the people I think we all miss on a day like this....but it also reminds me of the wonderful and lovely people we are so lucky to have in our lives today.

I hope you get to spend this very special day with the ones you love. Have a wonderful time....I certainly will.

A Molly Monkey in progress

Remember when I made the Baby Binky Bunny for our little nice Sara in Copenhagen?

She got very happy about it, and then I thought that it was time to make the bunny a friend for Christmas.

I have been making this monkey for quite a while now, because - as usual - my back isn't that good these days. But it's a lovely pattern, and cozy to work with so slow working is okay... Once more I'm using a wonderful pattern made by Larissa. It's called Molly Monkey - and can you believe that it can be downloaded for free at Larissa's blog?

However, it's possible to donate an amount of money for Larissa if you like, and that is what I'm going to do when the monkey is done. It must have been a huge job to make such a fine pattern.

As you can see, the monkey has very thin arms at the moment and a bit of a problem on one of the legs! But nothing some stuffing and handsewing can't deal with...

A monkey skirt and a monkey bow is needed too, and then perhaps a matching skirt for Sara - if my back will work with me.

If only I could read Icelandic

Then I would buy this book, which contains 17 patterns on baby blankets knitted and crocheted by 15 different women. 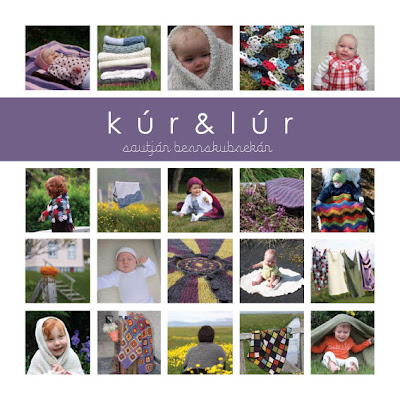 The book is published by Nalin. And all the blankets are knitted in yarn from the shop.

If only you could see the things made by Helga, who is one of the owners of the shop and the mother of Svanberg, an Icelandic friend of Emil's. I really admire her work. She made fabulos things for herself and her family.

She is a brilliant knitter and I just adore her embroidery too. Helga used to go to Skals Håndarbejdsskole and attended the collage of education in the same field. During that period of time the entire family lived in our town and that is why I know her.

Soon Nalin will open an online shop. I'm thrilled about that - and hope that it will send stuff to Denmark as well....
written by Ulla V. kl. 10:13 5 comments:

A B C happiness

Tags Blogging, Happiness, I am so lucky to have... ....I got tempted by haberdashery. Stripes and dots - I will never be cured for my love of those patterns.

So once again I'm over the moon about some ribbons - these woven ones are from Maileg. And I could have brought home lots more, but...

Besides that I'm busing painting the last pictures for my friend. She came with 11 canvases, which she is going to give her colleagues for Christmas, and I promised to fill them out. 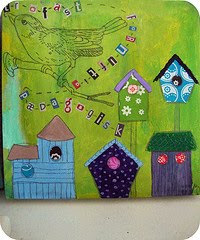 It has taken loads of time, but now I'm finally getting there. I still have 3 left, but hope to finish them this week....if my ideas keep coming. I'm not sure! It feels like they have been used up for a while... 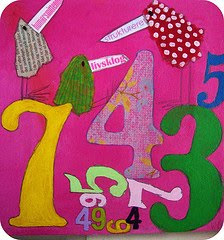 Of course I had to see what Klippan had made to make our everyday life beautiful at Christmas time. 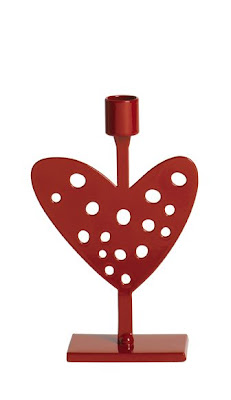 Once again it's Lotta Glave who has made some fabulous things.... 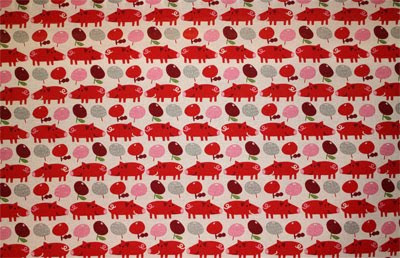 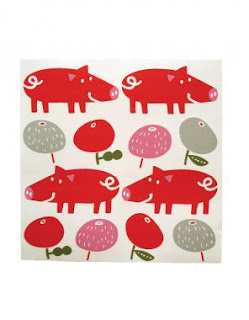 Words are never necessary with their elegant and inventive design....so no more from my side.

Tags Everyday life, Fabrics, I would love to have...., Inspiration 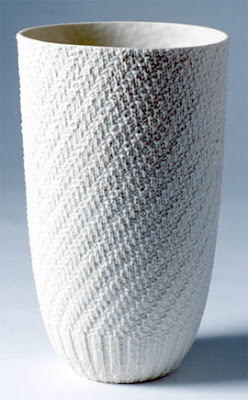 Knitted vases and bowls - it sounds rather strange if you ask me. But just have a look at the beautiful work from Annette Bugansky and see how elegantly she combined knitting and ceramics.
Annette Bugansky is a former textile and costume designer, who has now become a very talented ceramicist. 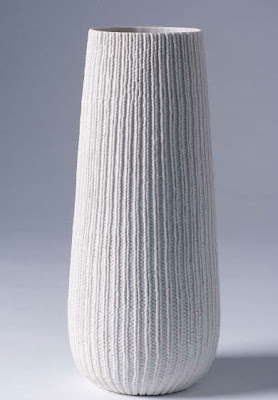 How she makes those beautiful knitting patterns appear on her art, is a mystery to me. But somehow that's also the part I love about it.

I for one wouldn't mind putting one of her vases on my Christmas wishlist. Or maybe just a tealight? 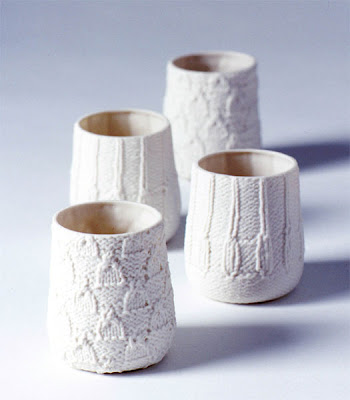 You can see more of her work here at loop (which by the way is a fabulos yarn shop).

Tags I would love to have...., Inspiration, Knitting, This and that, Wonderful stuff

December at my house December at my house, originally uploaded by lille-ursus.

It was such an extremely beautiful morning today. After weeks of grey and rainy weather, the sun broke through the skies. Oh, that's lovely! I love the light, but who doesn't? 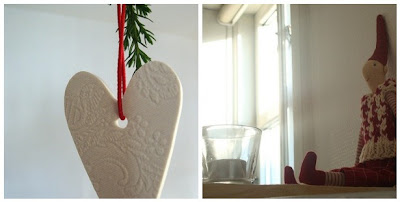 So, I took a few photos of our house and garden - dressed for December...

And as I promised you, kaylovesvintage, here are a few shots from the book JULEBOGEN. 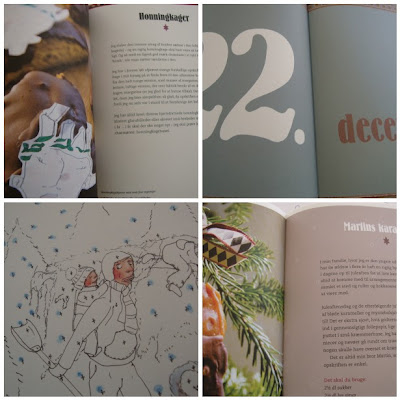