Sweet Peas are always a returning flower in my garden. I adore their soft colours and fragile look, and keep on picking some to take inside... I have been told that this makes the plants produce even more beautiful flowers.

This year I put the seeds near my green house, and now they have transformed into a pastel wall - georgeous and alive.

Hopefully I will remember to collect the seeds from the Sweet Peas, when that time of year comes along!

Tags Everyday life, Garden, I am so lucky to have... If you go to the bottom of my blog, and have a little look at TO SEE AND TO BE AT....you will find a new link called: Københavns Møbelsnedkeri. By clicking on this link, you can see the beautiful website, which belongs to my brother in law, Søren and his businesspartner.

Christian's littlebrother, Søren, is a cabinet maker and makes the most amazing furniture and kitchens. You should definitely go to the word møbler, find the word stole and have a look at A-Stool and A-Chair/A-Table if you enjoy georgeous childrens' furniture. I'm so impressed by his work and find it hard to believe, that a few years ago - or so!! - he was just a tiny 9-year-old fellow, with a very playful spirit....now he soon turns 33 and has a company of his own - luckily the playful spirit hasn't left him!

P.S. If you happen to come across the picture, which comes along with the words Ring of Fire, then you have just "met" Søren..... From DMI
This weather forecast brings a big smile to my face....
written by Ulla V. kl. 18:38 No comments: Links til dette indlæg In my quiet little space in front of our greenhouse, I spent some time this afternoon, while sewing a pair of baby trousers. While we were in Skagen I got a nice award. It was this one:

And it was given to me by Astrid - thank you so much Astrid.....that really made me happy :0)

I "found" Astrid on flickr, where she posts wonderful pictures of her children and georgeous crafts. You should go have a look at her blog - connecting the dots.

The award has to be passed on to 3 blogs I frequently read and get inspired by - so here we go:

Eaviola - for being a very inspirering blog. I really like the things she makes...

Kreativiteter - for being one of my all time favourite blogs. I love the creativity and funny spirit on this blog.

Tags Inspiration, You should go see....

These days we have been hearing a lot about skating and skateboards. (Not an uncommen thing, since Emil talkes about skating every day.) The sudden increase is caused by the fact, that Emil's birthday is coming up in the begining of August, and his very big birthdaywish is this board: Saturday we had another skate related experience. We went to a skatehouse for the very first time.

Emil has talked and talked about it for so long - he thinks that American boys and girls are extremly lucky to have more places to skate. A possibility we lack in our little town!! So we went to a place called "Minihuset" and this is how the skatehouse looked like....

Emil was a bit nervous at the beginning, because he was afraid that the other boys would laugh at him if he fell - and he was the youngest one there.

After observing the skating boys for a little while, he finally tried out the ramps. It was such a joy to watch him....he enjoyed himself SO much!! Christian & I simply couldn't help smiling...

No one laughed at all and all the boys there were very nice. I simply don't know how it happened, but these wonderful things followed me home - all the way from Skagen.....

Does anyone know this odd phenomenon?

Tags This and that, thoughts Back from some wonderful, sunny days with tent Finally she's back...Alanis Morissette is truely my all time favourite female singer. Her songs and clever words have meant so much to me. And who will ever get tired of listening to her heart touching voice, which is so full of emotions?? Not me... I just love embroidering.......especially in the garden when the weather is nice! 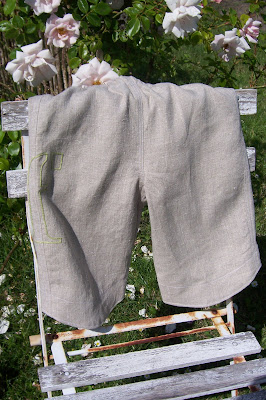